Water shortage? Never heard of one of those.

That's the problem - the rainfall and water isn't where the consumers are. Overcast her again and it rained overnight enough to collect about 80 litres in one of my water butts.

I think the UK is similar to here, in that in the past, heatwaves, drought and water shortages just didn't happen. We're perceived as wet countries, with miserable weather where its chilly and raining a lot of the time. I think that both individually and nationally, that perception needs to change. We DO get enough rainfall. But so much of it goes down the drains. I think everyone needs to be encouraged to harvest rainwater, and the Governments also need to be looking into harvesting rainwater on a much bigger scale than is currently the case. I also firmly believe that certain fundamentals should never be in the hands of private companies - water, energy and public transport, for example. The obscene levels of profit energy companies are making at the moment, for instance, is so immoral.
For my part, I already have two, 300 litre water butts. Over tge next couple of months, I intend getting at least another two, maybe 3 put on. Unfortunately they won't fit near downpipes, but as the two on the downpipes fill, I'll bucket it into the new ones.

I agree with you LadyA, on all points. We have had 30 years plus of being educated about recycling, but not about water saving/use/reuse. I am also envious of your beetroot haul, its one of my favourite things!

I never water the fruit trees. They're all around 20 years old now. So although I don't get the insane amount of plums I used to get, there was still an excellent crop. Dau's family and myself have been stuffed to the gills with delicious, tree-ripened plums. I've started two batches of plum wine and cooked down just 1kg to make jam tomorrow, but the rest, we're just gorging on! There aren't many left to ripen now, and of course there are a good number that are being eaten by birds, bugs and butterflies. After picking this afternoon, I stood and watched the butterflies feeding for a while. Never knew butterflies ate fruit!

The, almost criminal, point is that while we the consumers are exhorted to save water and use it wisely millions of gallons are lost through leaks in the system. Dividends are paid to shareholders instead of the money being used to repair/upgrade the pipe system.

I envy you LadyA as I don't have any fruit trees.

Margaid, I have way too many!

We had 5 mins of rain yesterday evening that just about wetted the pavement.

Our plums are tiny this year, and all the grass is just covered with leaves from the fruit trees and the Oaks, and tiny acorns. One end of the lake is now completely dry, still fairly deep in the middle, just hope it stays deep enough for the wildfowl to swim in at night, to keep away from the fox, we can see his footprints in the mud

We had an orange weather warning for thunderstorms, heavy rain and possibly hail all last night and today. Most areas nearby had spectacular lightning show last night with heavy rain.
We had 3 or 4 rumbles and 2 flashes of lightning. No rain.
I thought "surely today!"
This afternoon, thunder grumbled - but the sun shone through it!
Later, around teatime, the sky grew dark as pitch. I waited and waited for the heavy black clouds to burst. And - we had a light shower, that barely dampened the ground. [emoji3525] Slightly inland, they had thunder, lightning and torrential rain.

We had nice gentle rain for a good part of the day yesterday but it looks as though that's it for the week if we don't get the heavier showers in the early hours of tomorrow. Originally thunderstorms were forecast for yesterday, but that changed and last night the forecast still showed thunderstorms this afternoon and evening but that has also changed. I have about 200 litres of water spread between the various water butts. 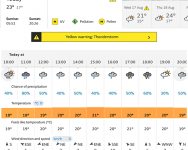 Dog walk done, in the blessedly cool air. Heavy clouds, but no rain yet. The forecast is changing all the time, and not in a good way. The promised thunderstorm at 11.00 has been cancelled, apparently. Where we are, less than 60% probability of rain translates into another dry day. Maddeningly, I know that, as usual, surrounding areas will probably get bucketfuls, and it will skim past us. Not hopeful.
Margaid, I envy you your hoarded riches. 200 litres of liquid gold!
D

We have only had a wee bit of rain this lunchtime. Temperatures still in the low teens. Sunny at times.

4mm today! Wonderful how some of the exhausted plants have gasped back and tried to hold their heads up a bit.

Nothing. But, it's been lovely and cool - only 19C with a very strong wind, all day. The very dry weather has led to a lot of the trees shedding their leaves very early.

Rain forecast for most of tomorrow in our area

Rain was forecast here for overnight and most of this morning. Nothing. [emoji3525]

Ditto, one side of London flooded, and south of the river in Kent. But us on the eastern fringes of London, half an hour of rain, yet we could see it bucketing down just north of us in Brentwood

When we lived in New Mexico, rainy season could be so frustrating at times, because clouds would gather, we would see heavy rain starting to fall - but tge air there is so dry, it would often evaporate long before it reached the ground! Then we could get a deluge - I remember once, we had 3 inches of rain in just over an hour!