Hello. I would be grateful for any advice. I have 6 hens at the moment and have been keeping hens for about 4 years. The current queen (Tikka, a Rhode Rock) has a rather sore looking chest where she has pecked away her feathers. It hasn't ever been pecked to the point of bleeding but it's obviously uncomfortable and not going away (after being there for about a month). She's about a year old. I thought previously it might be caused by an impacted crop (I've ruled that out I think), but I'm a bit stuck now without going to a vet. Thanks in advance! Photo attached. 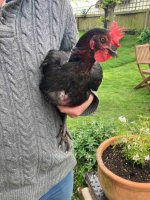 Is Tikka spending more time in the nestbox than usual? It's quite common for some hens to go broody at this time of year. As part of this, they may pluck an area of their breast so that the skin keeps the eggs warmer... Others on the forum have much more experience of this than me, but it was my first thought when I saw her bald patch & read your description.

Hi Ed, and welcome to the Forum.
Yes, like Icemaiden, my first thought was that she might be going broody, but in a Rhode Rock hybrid that’s pretty unlikely. Still, with chickens anything is possible, though if she isn’t spending extra time in the nestbox I think you can rule that out.
The other possibility is some kind of infestation, perhaps lice, though again this would be more usual around the vent, head or eyes. Alternatively, possibly you have a redmite infestation in the coop and she is being bitten overnight and then she has pecked at her feathers because she can’t effectively scratch her own chest.
A clearer closeup pic of the affected area would be helpful if you could manage that. Also, close inspection of the coop for traces of redmite. There are some articles in the main Poultrykeeper website about external skin conditions that may help, and quite a few posts about redmite etc in the Pests and Predators section lower down the menu in the forum.
See https://poultrykeeper.com/external-problems/
E

Hi Icemaiden and Marigold. Thank you for your replies and your welcome.

Tikka spends very little time in the nest box - in fact in the last month she has also stopped laying (my apologies, I meant to include that important bit of information in my previous message). About 3 weeks ago we introduced 4 new point of lay hens and moved all the hens into a new coop I've built, but the red mark on her chest preceded the new hens, new coop and her stopping laying. I've checked the new and old coop and can't find any evidence of red mite - I've always been as diligent as possible with preventing red mite by use of diatomaceous earth and regular cleaning. The new coop is as a result of recent fox activity where neighbours have lost multiple hens over the last couple of months. Ours were safe in the old coop but the episode caused me to build a new stronger version. I wonder if the sound of a fox prowling or trying to get in caused stress related pecking?

Thanks for link for external problems - I'll have a read through to see what I can find. I've attached a close up photo as requested along with a photo of all the hens in their new coop.

Thanks again for your help. Ed. 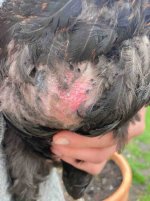 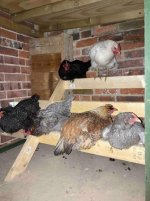 They look a very happy flock in their lovely new coop, Ed. Plenty of space, so less chance of redmite from overcrowding, especially as its new wood, and the weather has been so cold so I wouldn’t think a major outbreak of redmite is very likely yet.
I think your idea about stress may be possible, though. It sounds as if you were down to two hens, Tikka and another, then introduced 4 more at about the time she stopped laying and the feather loss started. How did she react when the newbies arrived, having to re-establish her position as top hen? Introductions are always a cause of stress, both to new young pullets and older established birds, and after only three weeks together the flock will still be in flux and will take a while to come to understand their new dynamics. It’s good that they have plenty of space to work it out for themselves.
It’s still possible, of course, that she has some sort of infestation, and a dose of lice powder on all of them would do no harm. Also, when was the last time you wormed the older ones with Flubenvet, and have you done the new ones yet? It’s good to do pullets arriving from a different biosystem once they’ve settled in well enough to be eating properly, to deal with any worms they may be importing from a breeder’s premises where hens have been kept on the same ground for a long time. There’s advice on here about how to do this by using Flubenvet powder and mixing it into a treats mix, which is better for small numbers than buying a premix bag of treated pellets, as you’ll probably either not have enough for them all for the week, or will have some over that will be out of date when next needed. A pot of powder will have enough to treat 20 hens, so will do your 6 three times over.
You must log in or register to reply here.
Share:
Facebook Twitter Reddit Pinterest Tumblr WhatsApp Email Share Link
Top