Is anybody out there?

Hi People, There don't appear to have been any new posts since 13th May. Is there something wrong wit my computer/system or are you all too busy doing other things to post?

I have nothing interesting to pass on but I'm feeling a bit lonely ...

Still here. I haven't really felt up to inter-acting in the last few weeks. My lovely mum passed away on 24th April. Not really unexpected - she was 85 and had several long term health problems. She had her final fall in January - a serious one, as she fell just after I left one evening and wasn't found until next morning. She had alarms etc., but didn't remember to use them. After a month in hospital, she spent her last 2 months in a nursing home as she lost all mobility. We've a lot to be thankful for - she was comfortable, well cared for, and died very peacefully. But I miss her dreadfully.

Another reason I've not been on much is that I'm just getting frustrated with Tapatalk. It's so slow to load new posts on my phone, going into sometimes endless "buffering ". I just don't have the patience for dealing with it at the moment.

And my last excuse - now that I have more time, I'm trying to catch up on several years of neglect in the garden! I've made some headway. I can see that I have. But when I look around and see all that's still needed, the bits I've done are hardly a drop in a bucket!

So sorry, LadyA - thinking of you, and sending virtual hugs xx
It’s a real kick in your guts when your mum dies - even though I knew mine was very frail after several strokes, I still had the feeling that she was tough as old boots and would just go on and on. Unlike you, I wasn’t so close to mine - we never managed to talk about the important things and our outlook was very different - but in the twenty years since she died I have had a lot of ‘conversations’ with her and as I’ve got older myself I feel much more in touch with her somehow.

We are away in Exmoor this week, in a lovely quiet cottage up a wooded combe. Facebook informs me that the long-awaited and very unwelcome application to build 210 houses on fields a few hundred yards from the house where we’ve lived for 50 years has finally landed. So back to work with the protest group tomorrow!
M

Sorry to read that Lady A. I know you did a lot for your mum and that leaves a big hole to fill

I've been and adult orphan for 18 years my parents having died within six months of each other, one unexpected the other not so much.
Because of the changes in my life I'm at last able to tackle the garden but indoors is still a dreadful muddle. One day at a time, and a little bit done of every day and you'll get there. Sending virtual hugs.

Good luck with the campaign Marigold. A planning application rears its' head here every few years but gets defeated on highway access and lack of infrastructure; no mains gas or drainage and there's a river to cross to link them up. It also helps that it's just inside the Shropshire Hills AONB.
H 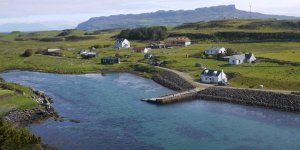 I checked in too and had one of those tumbleweed moments.
Lawrence MacEwan of the Isle of Muck died on Monday. A salutary reminder that the smaller islands of both Orkney and the Inner Hebrides have similar problems with depopulation as we do. Mystifies me as to why the total population of all the Scottish islands is only 105,000. OK, work opportunities are limited but as beautiful, crime free and community centred places you’d think many young idealists and retirees would be attracted.
Sorry to hear of your bereavement LadyA. Always difficult times. I once heard it said that one is never truly grown up until both one’s parents are dead. I don’t know about that but one’s parents deaths certainly bring about a shift in one’s relationship with the world. It also focuses one’s mind on the impermanence of one’s own life and the desirability of cracking on rather than idling away one’s days.

Yes, it is a bit of an "oh gosh - I'm now in the Responsible Adult category " moment! Both being widowed, mum and I tended to do a lot together, and as her care needs increased, it was natural that I would be doing more - my only sister lives in Australia, and the rest of the family are all doing either shift work or long days.

One of my jobs to be done was to reinstate my water butt's. The connecting hoses had perished. That's now done. This afternoon, I'm sanding the front gate, which is in dire need of a coat of varnish.

So sorry LadyA, thinking of you, it's a hard time when both your parents are gone, and you were very close to your mum.

We have been away, and are now busy catching up with lots of things.

Would love to retire there Hen-Gen, it looks idyllic
I

Hi Lady A.
I'm so sorry to hear about your mum. I hope you have lots of positive memories to comfort you, but I know how hard it is. It is an odd feeling to think that you're now the "oldest generation ", but it certainly sounds as though you're making your days count. I'll hold you in my prayers tonight if that's OK with you?

Icemaiden said:
Hi Lady A.
I'm so sorry to hear about your mum. I hope you have lots of positive memories to comfort you, but I know how hard it is. It is an odd feeling to think that you're now the "oldest generation ", but it certainly sounds as though you're making your days count. I'll hold you in my prayers tonight if that's OK with you?
Click to expand...

Thank you Icemaiden. It's appreciated.