For the Love of Keeping Chickens, Ducks, Geese, & Other Poultry.

Ad blocker detected: Our website is made possible by displaying online advertisements to our visitors. Please consider supporting us by disabling your ad blocker on our website.

The place to discuss the health of your chickens.
Forum rules
Please remember the advice offered by people should not constitute a diagnosis and does not replace the advice of a qualified vet.
Post Reply
10 posts • Page 1 of 1

Had my first go at nail clipping this afternoon. My bantam cock (Linden) was most in need of it - don’t get to see his toes very often under the feathers. They were starting to get long enough to curl on the soft bedding. My little CLB's nails were a little long too (Betty.)
All the others must scratch around more as they were fine.
Having read up about it I understood that only a small amount could be trimmed and I was guessing that it would take a couple of goes over a couple of weeks to get Lindens nails back in order. Between 1/8 and 1/4 inch was suggested.
All I can say is I'm glad I didn’t go for a 1/4"! The clippers have a depth limit and I set it to 1/8" - too much!
Linden just leaked a bit. Betty was leaving murderous trails behind her even though I used styptic powder and thought it had stopped.
They're fine now - I need a stiff drink! Try as I might I couldn’t clearly see where the 'quick' ended, particularly with Linden as his nails are black. How much is a safe maximum do you think?
Top

That's a 'how long is a piece of string' Rick. As with dogs, there isn't any exact length, it depends on how long (in time) it is since they were last pedicured, and also speed of growth seems to differ between birds. I've found the amount necessary to remove increases with age, and on some girls there's also spur growth to trim as they get older. You just have to try to take off the amount which will leave the quick intact. The end of the nail usually has a different look to it than the business bit, it sort of flattens out, and is usually possible to get an idea of how much is safe. It varies from almost nothing to up to 1/2" in some cases.
I'm quite surprised at your getting bleeding at 1/4", after the length of time you've had them, in an enclosed run. I'd have thought they'd have grown much more than that as they don't get much hard scratching on Aubiose. I don't do the job as often as I should, but when I do, every few months I suppose, I take off much more than that, usually with impunity but with the occasional accident - it's hard to tell, as you say. However, last year I bought a new pair of nail clippers for the dog, like yours with the so-called safety guard feature, but found these made it harder to see what I was actually doing, both on dog and hens. I think maybe you, too, are being mislead about how the setting actually works on the clippers So I went back to my smaller, simpler oldfashioned pair which just have jaws visible in relation to the nail end. I think these are better for a smaller 'client'.
You've reminded me of yet another job I should do, though....
Top

If his nails have bled after removing 1/8th inch then I would say that they just don't need clipping Rick. Normally in good light you can see the contrast between quick and excess growth, if there wasn't excess growth then understandably you wouldn't be able to see the difference. I use tin snips to cut and normally err on the side of caution.
Top

My coop is on a block paving floor so I think they file them down a bit scratching through the Aubiose. Lindens claws were about 3/4" long (well one of them was) and his toe was turning on its side when standing on a flat floor. Betty had a couple that were too long to get her toes flat as well. They are both quite small birds, of course. (Betty's feet are half the size of my hybrid's)
I noticed the flattening out on one of Betty's claws and that one didn’t bleed. Will also study them a bit closer with my glasses on next time! Linden still has one that is a bit long I think but going to leave it a couple of weeks at least to settle down and only take a tiny bit.

Actually, come to think of it, I took 2 1/8" snips of his longest claw as the first one seemed so small and went without incident. Also, Marigold, a long while ago you suggested holding their legs between fingers from behind. It had never worked for me generally before but when it came to nail clipping it worked a treat - no fuss, even from Betty who I expected to make a real drama of it!
Top

Yes, it always surprises me that they settle down in a resigned kind of way once I've got them in my judo hold! I only wish it was as easy when cutting the dog's nails - I've never hurt her but I dread doing it because she has such ticklish feet and wriggles so much, just as I've got the clippers in position. I expect she senses I'm nervous about the job, which makes her think I must be trying to hurt her. She has completely black nails too, which doesn't help.
Top

We compare one foot to the other Rick, then trim to match using 'Bib' wire strippers which cut a diamond shape, so 4 sides simultaneously. They were very cheap to buy 30 years ago but a quick search on Google seems they are obsolete, so the only way to get any may be a car boot sale or the tool section in a junk shop. Ours are the later versions with the plastic coated handles and a sliding screw and nut adjuster.
Top

If you mean this sort of tool then they're now refered to as Fibre Optic Strippers. There's plenty around.... this one is £6.16 on Amazon. 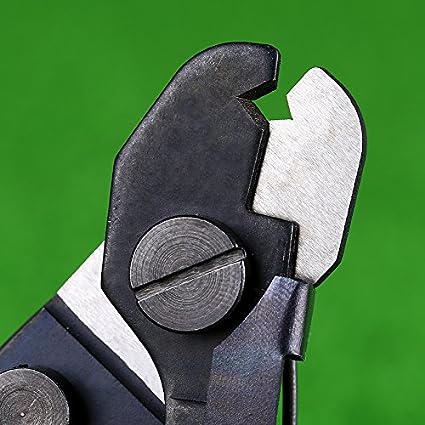 That's the sort of thing Colin, but the cutting area might be a bit too small for a chicken claw? Our Bib cutter can cut 5mm across the diamond shape and for all our chickens, large and small, has never failed. We do sometimes smooth the cut end with a nail file as well.
Top

After the nail file, do they get a couple of coats of claw polish, Chris?

Chickens are a girl's best friend (though diamonds would be nice too!)
Top